The Plague Open Season with Victory

Swamp City Rollers Rats kicked off their 2013 season with a 196-72 win against the Bay City Rollers.

The Plague bench held a different line-up from the end of last season, noticeably with Blue Blaze, Missy Tero and Blossom Rocket all absent with relative new-comers in those spots.


Both teams presented solid defensive walls on the first jam with both jammers fighting to emerge. Sunflash from SCRR grabbed the lead jammer status but was quickly followed by Angel Rage from BCR forcing her to call if off - snatching two points to zero. 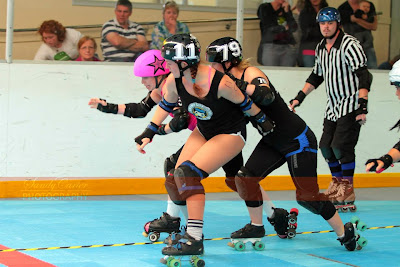 The Plague settled into rhythm of strong defence and a focus on recycling the BCR jammers. Plague jammers then pulled in high scoring passes; including two 14 point jams from Underage Rage and a half-time score of 108 – 18. SCRR players all commented on the strength of the rolling four-wall of their opponents with some jammers struggling to initial pass.


The second half continued with a  dynamic of strong defensive walls; once again leaving both teams jammers working hard to score points. SCRR’s blockers began to make use of strong hits and their fast turns to keep the BCR jammers stuck in the pack resulting in 30 unanswered points. 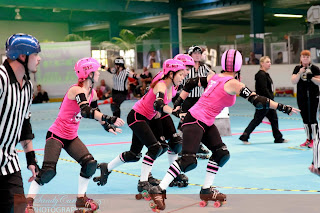 BCR had a resurgence when SCRR gave away several power jams where Krash Bambi Kute made her presence known as a strong BCR jammer scoring two swift 10 point jams. Blockers Happy Kilmore and Porterhouse Skate made an impact in with decisive hits to clear paths for their jammers.


However Underage Rage brought it home for SCRR with an impressive 24 point power -jam, where fluid team-work and offensive play from SCRR blockers allowed Rage to run down almost a full two-minute jam of scoring passes.

SCRR’s Poison Ivies have their first 2013 game this weekend in Levin against the Whenua Fatales and The Plague face off against the Taranaki Roller Corps “Rumblebees” on the 20th April in Palmerston North.
Posted by Swamp City Roller Rats at 18:14